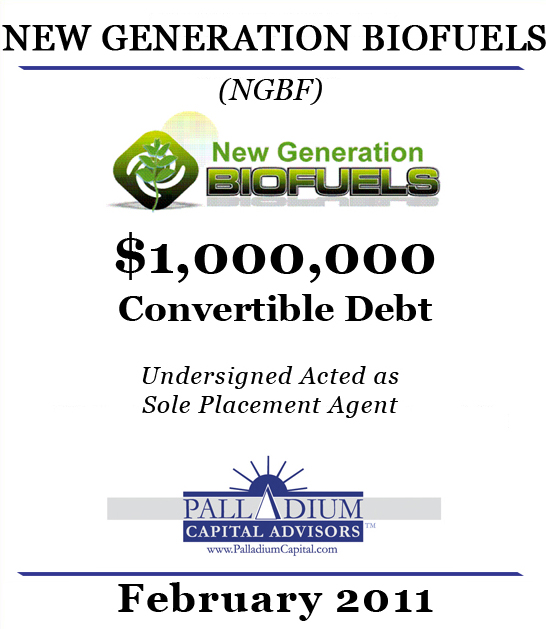 COLUMBIA, MD–(Marketwire – 02/02/11) – New Generation Biofuels Holdings, Inc. (Pinksheets:NGBF – News) (Pinksheets:NGBF – News) (the “Company”), a clean energy company deploying novel technologies to produce cleaner, renewable biofuels, announced today that it has entered into a definitive agreement with a limited number of institutional investors for the placement of Senior Secured Convertible Promissory Notes (the “Notes”) totaling $1.0 million (the “Offering”). The Notes are secured by the assets of New Generation Biofuels and are convertible into 10,000,000 shares of common stock of the Company at ten cents ($0.10) per share. Simultaneously with the closing of the Offering, the Company issued Class A warrants exercisable for 4,500,000 shares with an exercise price of ten cents ($0.10) per share and Class B warrants exercisable for 500,000 shares at one-half cent ($0.005) per share. The Notes may not be converted and the warrants may not be exercised until the Company’s shareholders approve an increase in authorized common stock as described in the Company’s definitive proxy statement, which was filed with the Securities and Exchange Commission on January 14, 2011.

Palladium Capital Advisors, LLC acted as the Placement Agent for this transaction.The Company intends to use the net proceeds for general working capital purposes. The Offering closed on February 1, 2011.

“This new infusion of capital will allow us to take several important near-term steps toward establishing value-added alliances with technology partners, feedstock suppliers and strategic customers. Chief among these are making fuel deliveries under our existing contracts; demonstrating a repeat-delivery cycle with our technology to produce a cleaner burning renewable product; and initiating feasibility studies of new, lower-cost feedstocks that have the potential to result in positive margins regardless of government incentives,” stated Miles F. Mahoney, President and Chief Executive Officer. “We believe these steps will further differentiate our biofuels technology as one of the cleanest, most cost effective approaches to renewable clean energy and position us as a preferred partner enabling our customers to meet the increasingly strenuous emissions standards being imposed by many countries around the world.”

Mr. Mahoney continued, “Properly funding our technical and business development efforts is critical to enhancing shareholder value over the long term. We request that shareholders approve the proposed increase in authorized common stock at the special shareholders’ meeting scheduled for February 10, 2011. The increase in authorized capital is necessary to facilitate the types of transactions that will help accelerate commercialization of our technology and build significant value for our shareholders. We appreciate the confidence our new investors have shown and continue to have discussions for additional capital once we have shareholder approval for the increase in our authorized shares.”

A proxy statement was recently mailed to shareholders with voting material for the special shareholders meeting. If you are a shareholder and have not received your proxy materials, please call your broker or (561) 847-2874 if you hold share certificates.

This press release does not constitute an offer to sell or the solicitation of an offer to buy, nor shall there be any sale of these securities in any jurisdiction in which such offer, solicitation or sale would be unlawful. Any offer will be made only by means of a prospectus, including a prospectus supplement, forming a part of the effective registration statement. Copies of the prospectus supplement together with the accompanying prospectus can be obtained at the Securities and Exchange Commission’s website at http://www.sec.gov.

The Company is a clean energy company deploying novel technologies to produce cleaner, renewable biofuels. The Company holds an exclusive license for North America, Central America and the Caribbean to commercialize proprietary technology to manufacture alternative biofuels from plant oils and animal fats that it markets as a new class of biofuel for power generation, commercial and industrial heating and marine use. The Company believes that its proprietary biofuel can provide a lower cost, renewable alternative energy source with significantly lower emissions than traditional fuels. New Generation Biofuels’ business model calls for establishing direct sales from manufacturing plants that it may purchase or build and sublicensing its technology to qualified licensees. Additional information about new Generation Biofuels is available at http://www.newgenerationbiofuels.com.