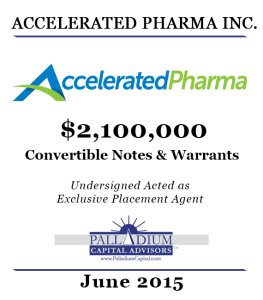 Accelerated Pharma, Inc. is a late-stage biotech com­pany in cancer drug development, focused on in-licensing late-stage drug programs that were halted by their developers because of non-critical issues, such as, a wrong choice of primary indication, errors in trial design, a change in corporate strategy, or lack of funding. Such programs have often already demonstrated safety and efficacy yet can be purchased for a small fraction of the R&D costs that had been invested in the development and testing of these compounds. The company intends to further develop and test these drugs through multi-national trials under the guidance of both the FDA and local regulatory bodies. These ex-US trials will be designed to achieve swift regulatory approval in non-US (BRIC) markets. These non-US launches will generate both revenue and extensive post-marketing data to support subsequent US and EU approval processes.

The company’s first acquisition is Picoplatin, a next-generation platinum-based chemotherapy initially developed by Poniard Pharma who invested more than $400 million in its R&D, but failed to obtain FDA approval because of unforeseen challenges in its Phase III pivotal trial and their sub-optimal choice for its first therapeutic indication. More than 20 clinical trials with Picoplatin involving 1,000+ cancer patients have been performed. The most impressive results have been observed in ovarian, colorectal and small cell lung cancer patients. Picoplatin is protected by broad international IP covering composition, manufacturing and use.