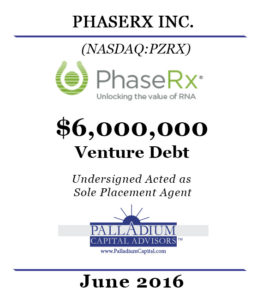 NEW YORK, NY – Palladium Capital Advisors, LLC today announced that it acted as sole placement agent for PhaseRx, Inc. (the “Company”), which on June 7, 2016, entered into a Loan and Security Agreement (the “Loan Agreement”) by and among the Company, the several banks and other financial institutions or entities from time to time parties to the Loan Agreement (the “Lenders”) and Hercules Capital, Inc. (‘Hercules”), in its capacity as administrative agent for itself and the Lenders, pursuant to which the Lenders agreed to make a term loan available to the Company for working capital and general business purposes, in a principal amount of up to $8 million (the “Term Loan”). On June 7, 2016 (the “Closing Date”), the Lenders funded $6 million of the Term Loan. An additional $2 million of the Term Loan may be requested by the Company during the period commencing upon the Company entering into an arms-length strategic corporate development transaction that is validating in the agent’s and Lenders’ sole discretion (the “Milestone Event”) and ending upon the earlier to occur of (a) December 15, 2016, (b) the date which is 45 days after the consummation of the Milestone Event and (c) the occurrence of an event of default under the Loan Agreement (the “Draw Period”). The Term Loan is secured by substantially all of the Company’s’s assets other than the Company’s intellectual property.

The Term Loan bears interest at a floating annual rate equal to the greater of (i) 9.25% and (ii) the sum of (a) 9.25%, plus (b) the prime rate as reported by The Wall Street Journal minus 3.50%. We are required to make interest payments in cash on the first business day of each month, beginning on July 1, 2016. The Term Loan will begin amortizing on July 3, 2017, in equal monthly installments of principal and interest, with such payments beginning on July 3, 2017, and continuing on the first business day of each month thereafter until the Term Loan is repaid. The final maturity date of the Term Loan is December 2, 2019. Upon repayment of the term loan, the Company is also required to pay an end of term charge to the Lenders equal to 5.85% of the aggregate original principal amount of all Term Loan advances extended by the Lenders to the Company.

The Loan Agreement includes affirmative and negative covenants applicable to the Company. The affirmative covenants include, among others, covenants requiring the Company to maintain its legal existence and governmental approvals, deliver certain financial reports and maintain insurance coverage. The negative covenants include, among others, restrictions on the Company transferring collateral, incurring additional indebtedness, engaging in mergers or acquisitions, paying dividends or making other distributions, making investments, creating liens, selling assets, and suffering a change in control, in each case subject to certain exceptions. In general, the Loan Agreement prohibits the Company from (i) repurchasing or redeeming any class of the Company’s capital stock, including its common stock or (ii) declaring or paying any cash dividend or making a cash distribution on any class of the Company’s capital stock, including common stock, subject to certain exceptions.