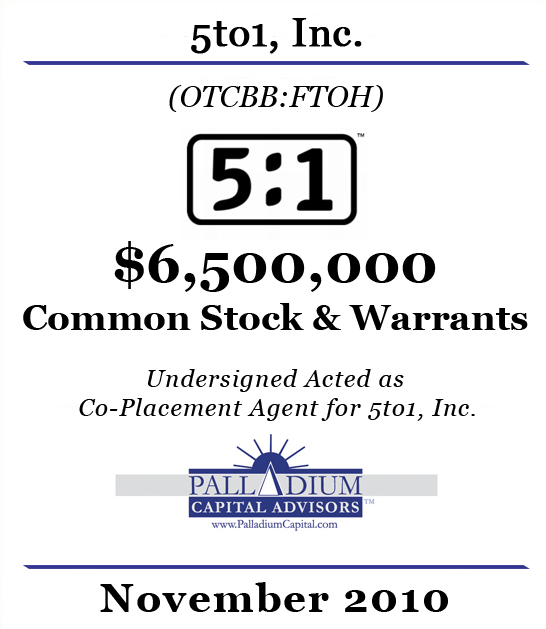 Palladium Capital Advisors, LLC acted as Co-Placement Agent for 5to1.

The funding was organized by the CEO and founding investors of Interclick (Nasdaq:ICLK) along with The Frost Group. 5to1 will continue its business as a wholly owned subsidiary of 5to1 Holding Corp under the leadership of 5to1’s current management team which is headed by Chief Executive Officer, James Heckman. Effective November 11, 2010, the Company is quoted on the OTC markets under the symbol “FTOH”.

5to1 has formed an alliance of major media publishers, managing and selling unsold inventory on a publisher-only controlled advertising platform. The company was founded by former Fox Interactive Media executives, James Heckman (CEO) and Ross Levinsohn (Chairman) who were able to gather many of the top digital pioneers in the industry to join as co-founding advisors and investors, including Levinsohn’s former partner at Fuse Capital, Jonathan Miller (News Corp. CEO Digital Media), who helped

5to1 also includes a management team with over 200 years of senior officer Internet leadership experience, the core of which came from Fox Interactive Media’s executive staff. Heckman, Levinsohn and outgoing interclick CEO Mike Mathews will comprise the Board of Directors.

Commenting on the financing, director Michael Mathews stated, “Having successfully undertaken a similar funding strategy, Mr. Heckman’s decision to leverage public funding via this transaction is clearly aimed at preserving shareholder value while positioning the company for exceptional growth. Operating in this same space for the last three years, I’m a strong believer in the advantage and opportunity their unique approach presents because online advertisers have simply neglected the supply side of this business. 5to1’s model aims to correct that imbalance, while still technically integrating with the DSP world. By aligning and then empowering premium publishers, 5to1 has created new opportunities for top Fortune 1000 brands that clearly differentiate itself from others in our industry. 5to1 is showing up at the right time, with the right platform, to solve the biggest problem for major ad brands — true premium content access at efficient scale.”

The Frost Group led the $6.5 million Investment. Dr. Frost, Chairman of Teva Pharmaceutical Industries and Ladenburg Thalmann Financial, stated, “I am excited to work with a proven, world class management team, along with board leadership from Ross Levinsohn and Mike Mathews, and a CEO with a long history of innovation and success,” said Dr. Frost. “I’m backing this team, because I think they have the relationships and a proven track record to be successful.”

Jim Heckman, CEO, stated, “We’ve quietly built a media coalition on top of a first-to-market advertising platform that presents an opportunity for premium brands to reach the most valuable consumers. Our mission is to focus on the most important segment of the advertising ecosystem — premium brands and media partnered in a true marketplace environment. We clearly value and empower branding over the algorithmic approach and our funding strategy syncs with the company’s overall contrarian thesis by aligning with major media leaders as financial partners along with the public marketplace.”

“This funding will enable us to demonstrate that publishers, when properly empowered, are far better equipped to understand, protect and manage their own advertising inventory than a conflicted computer,” added Heckman. “We are laser focused on putting value back in the hands of those who have created it.”

About 5to1 Inc
5to1 has formed an online advertising alliance of major media publishers built on a proprietary, publisher-controlled platform that ensures consistent pricing and quality while eliminating sales channel conflict. The 5to1 alliance offers top brand advertisers true premium inventory at mass scale, something that otherwise does not exist in the online advertising ecosystem today.

About James Heckman, CEO & Founder of 5to1
Heckman brings more than two decades of CEO operating experience, as well as major media distribution relationships to 5to1. Heckman founded and led seven media companies, including several Internet ventures such as Rivals.com and Scout.com, pioneering models for social networking, blogging, as well as one of the first vertical ad networks. Both companies were eventually sold separately to Fox and Yahoo! and still operate today, with over ten million visitors.

Heckman is best known for his pioneering efforts to monetize user generated content, having architected and closed the $900 Million Myspace/Google alliance, while Chief Strategy Officer at Fox Interactive. Levinsohn, Heckman and several current 5to1 executives also participated at Fox in helping create the original vision, business model and partnership formation for Hulu.

After Fox and before founding 5to1 with other Fox executives and Rivals/Scout engineers, Heckman architected the new strategy for Zazzle.com and led their successful fundraising efforts. Prior to his Internet experience, Heckman spent his career as a magazine publisher, owning and operating more than 60 sports publications, including joint ventures with NFL Properties, Turner and over 35 division I Universities.