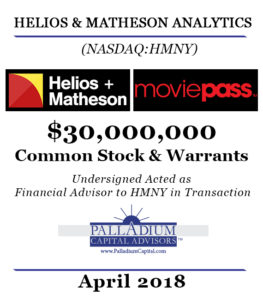 NEW YORK–(April 19, 2018)–Palladium Capital Advisors, LLC acted as financial advisor to Helios and Matheson Analytics Inc. (Nasdaq: HMNY) (“HMNY”), a provider of information technology services and solutions and the 92% owner of MoviePass Inc. (“MoviePass”), the nation’s premier movie-theater subscription service, who today announced the pricing of a best efforts underwritten public offering of an aggregate of 10,500,000 Series A-2 units (the “Series A-2 Units”), with each Series A-2 Unit consisting of (i) one share of the Company’s common stock, par value $0.01 per share (the “Common Stock”), and (ii) one Series A-2 Warrant to purchase one share of Common Stock (the “Series A-2 Warrants”); and 500,000 Series B-2 units (the “Series B-2 Units”, and together with the Series A-2 Units, the “Units”), with each Series B-2 Unit consisting of (i) one pre-funded Series B-2 Warrant to purchase one share of Common Stock (the “Series B-2 Warrants”, and together with the Series A-2 Warrants, the “Warrants”) and (ii) one Series A-2 Warrant, with anticipated gross proceeds of approximately $30 million, before deducting underwriting discounts and commissions and estimated offering expenses payable by HMNY. HMNY is offering the Units at a price of $2.75 per Unit. All of the Units are being offered by HMNY. The shares of common stock and warrants will be issued separately. The Warrants will be exercisable at any time on or after the issuance date until the five-year anniversary of the issuance date. Each Series A-2 Warrant will be exercisable at a price of $3.00 per share of common stock. Each Series B-2 Warrant will have an aggregate exercise price of $2.75 per share of common stock, all of which will be pre-funded except for a nominal exercise price of $0.001 per share of common stock. There is no established public trading market for the Warrants and HMNY does not expect a market to develop in the future. The offering is expected to close on or about April 23, 2018, subject to customary closing conditions. HMNY may use the net proceeds from this offering to increase the Company’s ownership stake in MoviePass or to support the operations of MoviePass and MoviePass Ventures; to satisfy a portion or all of any amounts payable in connection with previously issued convertible notes; and for general corporate purposes and transaction expenses. The Company may also use the proceeds to make other acquisitions.

Canaccord Genuity is acting as sole book-running manager for the offering, with Roth Capital Partners and Maxim Group acting as co-managers. Palladium Capital Advisors, LLC acted as a financial advisor in connection with the offering.

About Helios and Matheson Analytics Inc.

MoviePass Inc. is a technology company dedicated to enhancing the exploration of cinema. As the nation’s premier movie-theater subscription service, MoviePass provides film enthusiasts the ability to attend up to one movie per day for a low subscription price. The service, now accepted at more than 91% of theaters across the United States, is the nation’s largest theater network. For more information, visit www.moviepass.com.

This release contains forward-looking statements within the meaning of Section 21E of the Securities Exchange Act of 1934, as amended, including but not limited to statements regarding HMNY’s expectations on the completion, timing and size of the proposed public offering and the anticipated use of proceeds therefrom. These forward-looking statements are subject to a number of risks, including market conditions related to the proposed public offering and the risk factors set forth from time to time in HMNY’s SEC filings, including but not limited to the risks that are described in the “Risk Factors” section of HMNY’s Annual Report on Form 10-K for the year ended December 31, 2017, and in the preliminary prospectus supplement related to the proposed offering filed with the SEC on April 18, 2018, each available on the SEC’s web site at www.sec.gov. In addition to the risks described above and in HMNY’s other filings with the SEC, other unknown or unpredictable factors also could affect HMNY’s results. No forward-looking statements can be guaranteed, and actual results (including, without limitation, the ability to complete this offering and generate the net proceeds necessary for HMNY to complete its business objectives) could differ significantly from those contemplated by the forward-looking statements. The information in this release is provided only as of the date of this release, and HMNY undertakes no obligation to update any forward-looking statements contained in this release on account of new information, future events, or otherwise, except as required by law.