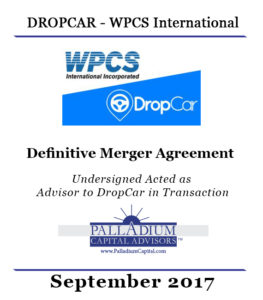 New York, NY – (September 6, 2017) – Palladium Capital Advisors, LLC acted as the advisor to DropCar on the following transaction. WPCS International Incorporated (NASDAQ: WPCS), a low-voltage solutions provider and DropCar, Inc. (“DropCar”), a privately-held provider of app-based automotive logistics and concierge services for both consumers and the automotive industry, jointly announced that today the parties have entered into a definitive merger agreement whereby WPCS will acquire DropCar in an all-stock transaction.

According to Sebastian Giordano, CEO of WPCS, “Our goal has been to provide an opportunity to enhance stockholder value, and we believe that DropCar is well-positioned to capitalize on the burgeoning auto-tech and next-generation mobility and logistics services industry.”

A highly qualified management team with substantial and demonstrated experience in technological innovation and automotive-related logistics will lead the combined company. DropCar’s Co-Founder and CEO, Spencer Richardson will assume the role of CEO of the merged entity, while Mr. Giordano will remain as a member of the Board of Directors. In addition to Messrs. Richardson and Giordano, the Board will be comprised of a total of seven directors, including, DropCar’s Co-Founder, David Newman, three DropCar designees, and Joshua Silverman who currently serves on WPCS’s Board.

Mr. Richardson is a proven and successful technology innovator who previously built FanBridge into a premier Fan Audience CRM platform with over 600 million fan relationships. Mr. Newman will continue to lead DropCar’s business-development, leveraging his 20 years of experience in the legal, real estate and parking garage sectors.

Mr. Richardson stated that, “Today, our platform takes away the hassle of owning a car in the city for consumers while simultaneously helping OEMs, dealers, and shared mobility providers reduce costs and deepen connections with customers. We believe this merger will enable us to further scale this platform and position us well to become the de-facto standard in a future where auto purchases give way to auto subscriptions.”

The transaction, which has been approved by the board of directors of both companies, is expected to occur in the fourth quarter of 2017, subject to various conditions, including: approval by the stockholders of both WPCS and DropCar; a requirement by DropCar to raise at least $4 million prior to the consummation of the merger; and approval by NASDAQ for the listing of WPCS common stock immediately upon consummation of the merger.

Upon closing of the transaction, the merged company will operate under the DropCar name, and the Company’s common stock will trade on the NASDAQ Capital Market under a ticker symbol to be announced at a later date.

WPCS and DropCar will host a joint teleconference this afternoon, September 6, 2017, at 4:15 PM EDT to discuss today’s announcement.

A recorded replay of the teleconference will be available on the WPCS website. The replay may be accessed through the “newsroom” section of WPCS website, http://www.wpcs.com/newsroom.php.

Founded and launched in New York City in 2015, DropCar offers a cloud-based platform and mobile app that help consumers and automotive-related companies reduce the cost, hassles and inefficiencies of owning a car, or fleet of cars, in urban centers. Its technology platform blends the efficiency and scale of cloud computing, machine learning and connected cars with the high-touch of highly trained valets to move cars to/from fully staffed, secure garages to/from the people (or businesses) who own them. Consumers use DropCar’s mobile app to ease the cost and stress of owning a car in the city. Dealerships, leasing companies, OEMs and shared mobility companies use DropCar’s enterprise platform to reduce costs, streamline logistics and deepen relationships with customers. More information is available at www.dropcar.com.

Additional Information about the Proposed Merger and Where to Find It

In addition, investors and securityholders may obtain free copies of the documents filed with the SEC by WPCS by directing a written request to:  WPCS International Incorporated, 521 Railroad Way, Suisun City, CA 94585, Attention: Chief Financial Officer.

Investors and securityholders are urged to read the proxy statement / prospectus / information statement and the other relevant materials when they become available before making any voting or investment decision with respect to the proposed merger.

Participants in the Solicitation