Palladium Advises Helios and Matheson Analytics Inc. in Its Purchase of Majority Stake in MoviePass™ 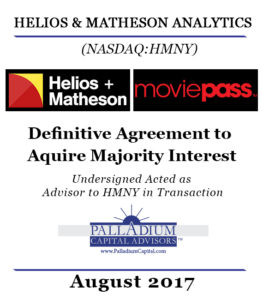 HMNY continues to acquire companies on the cutting edge, with first-mover advantage, disruptive technology and solid management. MoviePass is available in over 91% of all theaters in the U.S. This includes AMC, Regal and Cinemark theaters along with independent theaters. The MoviePass app enables subscribers to see unlimited movies, in theaters with no blackout dates; no contracts; just a low flat $9.95 monthly fee.

“MoviePass was founded to make it easier for passionate moviegoers and casual fans to see films the way they’re meant to be seen — in the theater,” said Mitch Lowe, CEO of MoviePass. “Our vision has always been to make the moviegoing experience more affordable and enjoyable for our subscribers. We are changing the way consumers think about going to the movies by making it possible to experience a broader array of films — from the latest summer blockbuster to a critically acclaimed documentary — through a subscription model. Today’s acquisition by Helios & Matheson is a huge step towards making our vision a reality by allowing us to introduce a new $9.95 nationwide subscription service that completely disrupts the movie industry in the same way that Netflix and Redbox have done in years past.”

In July 2017, Drake Star Partners released an independent report on entertainment technology. The report states that, despite the marketing of Streaming Video On-Demand (SVOD) services such as Netflix and Amazon, 2016 box office dollars set a new record. The report additionally affirmed MoviePass a true win-win-win situation for the moviegoer, the movie studios and the theaters. For the subscribers – who, incidentally, represent a powerful demographic with 75% of the user base under 35 – the low subscription cost enables them to see more movies than they may otherwise wait to see in post-theater release, which is critically important to the films that currently make up the release schedule. It’s further reported that subscribers, on average, have increased their annual moviegoing budget four-fold.

In addition, a 2016 independent report by Mather Economics found that MoviePass members showed a 100% increase in moviegoing. This includes a 50% increase in mid-week attendance and a 123% increase in concession revenues. In short, the subscription trumps the pay-per-view approach, reducing its high customer acquisition cost to the MoviePass risk-free, contract-free model.

“I believe the technology platforms that Helios and Matheson has built over the years are a perfect fit for the MoviePass family,” said Ted Farnsworth, Helios and Matheson’s Chairman and CEO. “With our big data and artificial intelligence platforms and other technologies that we own, we will be able to bring a significant technological advantage to MoviePass. Our mission at HMNY is to continuously be innovating, and this blending is a natural fit to take us up to the next level and beyond.”

MoviePass will continue its operations with existing leadership and continue to expand throughout the U.S. MoviePass has agreed, following the closing of this transaction, to apply for listing and seek to begin trading on the Nasdaq Stock Market or the New York Stock Exchange by March 31, 2018, at which point HMNY would remain the majority shareholder of MoviePass.

“As a Co-founder of MoviePass, the establishment of a subscription service has and continues to be the catalyst needed to reinvigorate the film industry,” said Stacy Spikes, MoviePass COO. “This partnership with Helios and Matheson brings together the perfect combination of resources and innovation needed to bring that goal one step closer to reality. Our data continues to reinforce the amazing benefits of subscription for customers, theaters and studios. For our industry to remain relevant, we must be bold and experiment with wild new ideas.”

“My past experience at Facebook gave me the wherewithal to see that MoviePass was destined to disrupt the movie and entertainment industry. As a passionate movie lover, I saw MoviePass as a great company to bring people back to the theater to share in the social experience only the big screen can provide,” said Chris Kelly.

The closing of the MoviePass transaction is conditioned upon HMNY consummating an equity or equity-linked financing transaction with aggregate gross proceeds of at least $10 million, among other material conditions to be described in the Current Report.

HMNY’s two largest stockholders, collectively holding approximately 49% of HMNY’s outstanding shares of common stock, have agreed to vote in favor of the MoviePass transaction and concurrent financing transaction, as will be described in the Current Report, for purposes of compliance with Nasdaq Listing Rule 5635.

About Helios and Matheson

Helios and Matheson Analytics Inc. (NASDAQ: HMNY) is a provider of information technology services and solutions, offering a range of technology platforms focusing on big data, artificial intelligence, business intelligence, social listening, and consumer-centric technology. Its holdings include RedZone Map™, a safety and navigation app for iOS and Android users, a community-based ecosystem that features a socially empowered safety map app that enhances mobile GPS navigation using advanced proprietary technology. Through TrendIt, Helios and Matheson has acquired technology addressing crowd and migration patterns, and consumer behavior in real-time. The patented technology predicts population behavior, along with a crowd’s population size, origin and destination. HMNY is headquartered in New York, NY and listed on the Nasdaq Capital Market under the symbol HMNY. For more information, visit us www.hmny.com.

MoviePass is a technology company dedicated to enhancing the exploration of cinema. As the nation’s premier movie-theater subscription service, MoviePass provides film enthusiasts the ability to attend unlimited movies. The service, now accepted at more than 91% of theaters across the United States is the nation’s largest theater network. For more information, visit www.moviepass.com.

INVESTORS AND SECURITY HOLDERS ARE URGED TO READ THE PROXY STATEMENT AND THE OTHER RELEVANT MATERIALS WHEN THEY BECOME AVAILABLE BEFORE MAKING ANY VOTING OR INVESTMENT DECISION WITH RESPECT TO THE PROPOSED TRANSACTIONS.

Participants in the Solicitation

Certain statements in this communication contain forward-looking statements within the meaning of the Private Securities Litigation Reform Act of 1995 or under Section 27A of the Securities Act of 1933, as amended, and Section 21E of the Securities Exchange Act of 1934, as amended (collectively, “forward-looking statements”) that may not be based on historical fact, but instead relate to future events, including without limitation statements, regarding the expected completion of the acquisition, the time frame in which this will occur, the expected benefits to HMNY and MoviePass from completing the acquisition, and the expected financial performance of HMNY following completion of the acquisition. Statements regarding future events are based on the parties’ current expectations and are necessarily subject to associated risks related to, among other things, the conditions to the closing of the acquisition may not be satisfied (including, without limitation, the requisite equity or equity-linked financing transaction of HMNY with gross proceeds of at least $10 million upon which the MoviePass transaction is conditioned), the occurrence of any event, change or other circumstances that could give rise to the termination of the securities purchase agreement between MoviePass and HMNY, and general economic conditions. Therefore, actual results may differ materially and adversely from those expressed in any forward-looking statements.

Such forward-looking statements are based on a number of assumptions. Although the parties believe that the assumptions made and expectations represented by such statements are reasonable, there can be no assurance that a forward-looking statement contained herein will prove to be accurate. Actual results and developments may differ materially from those expressed or implied by the forward-looking statements contained herein and even if such actual results and developments are realized or substantially realized, there can be no assurance that they will have the expected consequences or effects. Risk factors and other material information concerning HMNY are described in its Annual Report on Form 10-K for the fiscal year ended December 31, 2016 and other filings, including subsequent current and periodic reports, information statements and registration statements filed with the U.S. Securities and Exchange Commission. You are cautioned to review such reports and other filings at www.sec.gov.