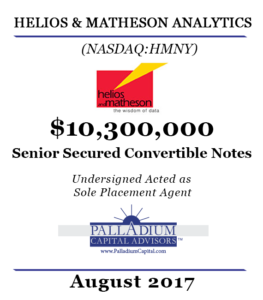 New York, NY – Palladium Capital Advisors, LLC acted as sole placement agent for Helios and Matheson Analytics, Inc. (the “Company”) in their sale and issuance of three Senior Secured Convertible Notes to an institutional investor in the aggregate principal amount of $10,300,000. Some of the details are below. The full 8-K filing regarding the transaction is available here.

On August 16, 2017 (the “Closing Date”), pursuant to the Securities Purchase Agreement dated as of August 15, 2017 by and between the Company and an institutional investor (the “Investor”), the Company completed the sale and issuance of (1) three Senior Secured Convertible Notes to the Investor in the aggregate principal amount of $10,300,000 (collectively, the “Notes”), and (2) a warrant to purchase 1,892,972 shares of the Company’s common stock, exercisable for a period of five years at an exercise price of $3.25 per share (the “Investor Warrant”), for consideration received by the Company on the Closing Date consisting of (i) a cash payment of $220,000, and (ii) a secured promissory note payable by the Investor to the Company (the “Investor Note”) in the principal amount of $8,800,000 (collectively, the “August 2017 Financing”). The maturity date of the Notes and the Investor Note is April 16, 2018. On the Closing Date, in connection with the closing of the August 2017 Financing: