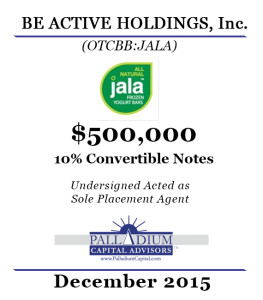 The maturity date of the notes is December 30, 2016. The holders have the right to convert the outstanding principal and accrued annual interest of 10% at $0.30 per share. The Company agreed not to take certain actions, including the incurrence of debt and amending its articles, without the prior consent of the holders of 51% of the outstanding Notes.