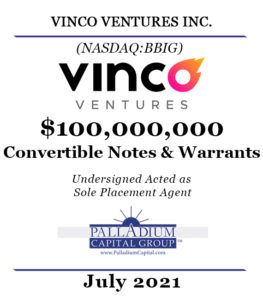 Some key highlights of the Lomotif acquisition by Vinco Ventures:

“This is an exciting time for us here at Lomotif, as we’re building one of the largest short form video platforms in the world in such a short period of time,” said Paul Yang, CEO of Lomotif. “With this acquisition, we are taking Lomotif to the next level and combining new touch points in the media and entertainment industry such as syndicated television and music with short form video and user generated content which is currently one of the fastest growing segments. We are very well positioned to be one of the top video platforms for the long-term. Just in the short time we have been together, we have seen tremendous growth from the marketing and positioning strategies brought from the ZASH, Vinco Ventures and ZVV Media team. I am excited about the future, which looks bright for us.”

“We couldn’t be more proud to have Lomotif as the crown jewel of our media and entertainment company alongside ZASH and Vinco Ventures,” said Ted Farnsworth, co-founder of ZASH. “The combination of these three entities makes an incredibly robust and totally disruptive media and entertainment company worldwide, with tens of millions of monthly users around the world that allows us to leverage all of our content globally.”

“We’re thrilled to implement the next part of the plan for these three companies now that we have closed the deal with Lomotif,” said Christopher Ferguson, CEO of Vinco Ventures. “From day one we knew Lomotif would be a key part of our plan to disrupt the media and entertainment industry, and the job is to execute that vision going forward.”

The addition of Lomotif enhances Vinco Ventures and ZVV Media’s offering by adding a short-form video component to its overall ecosystem as the company continues to grow a global content-centric technology company.

Lomotif is one of the fastest growing video-sharing social networking platforms in its category over the last three years, with 225+ million installations of the Lomotif app globally in over 200 countries in 300+ languages. According to outside tracking services, over 300 million videos are watched on the platform per month and over 10 billion atomic clips (User Generated Content (UGC)) have been used to create more than 750 million videos on the platform since its launch.

Current global expansion is underway in India, the world’s second largest market, and a country where competitor TikTok is banned. With the number of social media users in India currently over 350 million, and social network users in the country expected to be nearly 450 million in 2023, the push into India is a major focus for Lomotif.

Throughout Asia, Europe and South America, Lomotif has increased its average monthly community by over 400 percent in this time span. The platform’s dominant, global user traction and reach demonstrates massive untapped value and Lomotif’s potential growth.

Lomotif is also carving out an imposing presence in the music space, having recently partnered with LiveXLive for global live streaming distribution of Music Lives 2021, which drew over 37+ million views on the Lomotif platform alone.

Lomotif is the leading video-sharing social networking platform that is democratizing video creation. Since the company was co-founded by video enthusiast Paul Yang in 2014, Lomotif has been granted three technology patents uniquely focused on empowering creators to share and watch short videos with ease through remix and collaboration. Yang’s bold vision is to build the world’s largest video vocabulary to accelerate the world’s transition to video-first expression. Lomotif, available in the Apple and Google stores, is a downloadable app for hip hop, rap, and urban culture across the United States and Latin America. Lomotif is one of five partners selected by Snapchat for a bi-directional integration for posting stories between the two platforms. For additional information about Lomotif Private Limited, please visit Lomotif’s website at www.lomotif.com.

Vinco Ventures, Inc. (BBIG) is a selective acquisitions company focused on digital media and content technologies. Vinco’s B.I.G. (Buy. Innovate. Grow.) strategy is to seek acquisition opportunities that are poised for scale and will “BE BIG”. For more information visit Investors.vincoventures.com.