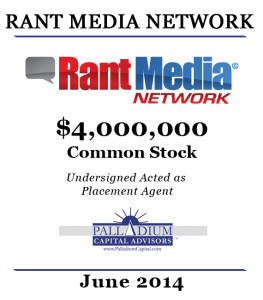 “This additional raise lends incredible validity to Rant’s growth goals and objectives as well as our long-term corporate vision,” said Brett Rosin, CEO, Rant Media Network. “To meet growing demand and open new opportunities for our valued partners, we plan to use this funding to invest in sales and technology to pursue our mission of becoming the world’s premier destination for opinionated sports, entertainment, and lifestyle content. This includes scaling our go-to-market teams and focusing on ramping our technology to build the best, integrated consumer experience across all our properties.”

Since launching in 2010, many large brands such as Anheuser Busch, Miller Coors, Procter and Gamble and the Jim Rome Show have partnered with Rant’s RantSports to take advantage of its broad network of exclusive writers and to connect with its highly engaged and passionate audience. The company launched men’s and women’s entertainment sites RantLifestyle and RantChic in the fourth quarter of 2013, and the total audience for its network of sites had grown to over 17 million monthly unique visitors (per comScore) by the end of that quarter. In only its third month, RantLifestyle already comprised almost a third of the network’s audience. Rant’s user base also continues to grow more engaged and already has accumulated more page views — over 2.3 billion across its network of sites — than it did for all of 2013.

Brands are also able to realize significant value in the quality content written by Rant Media Network’s 400 paid writers across the United States and to create their own unique native content experiences. “Our clients are constantly looking for engaging, premium content, and, additionally, to leverage that content to create compelling consumer experiences. By tapping into Rant’s prolific network of writers, Rant can integrate advertiser messages in a more credible and engaging way,” said Grant Brown, Chief Revenue Officer of Rant.

Rant’s fully transparent business model also allows advertisers to know exactly where their brand messaging is showcased on the network. “What makes Rant interesting is the level of transparency they provide with their network. This allows for more control and optimization,” says Rob Griffin, EVP, Global Head of Digital Havas Media. “I look forward to continued discussions with them as they grow.”

“I’ve been an active supporter of Rant’s growth to date and am excited to be a part of its next stage of growth. This additional investment will help the company to continue to build out and differentiate its technology platform offerings and gain even more momentum,” said Barry. “As sports, entertainment and lifestyle brands seek more premium content and targeted audiences, Rant will continue to provide advertising solutions that are ahead of the curve.”

Across its sites, Rant leverages its broad network of more than 400 paid writers across the United States, Canada, and the United Kingdom to provide male and female enthusiasts with entertaining and engaging content. Major brands partner with Rant to develop unique native content experiences and to reach its passionate audience. Rant offers deeply engaging content across its 100% owned and operated and fully transparent network of sites.